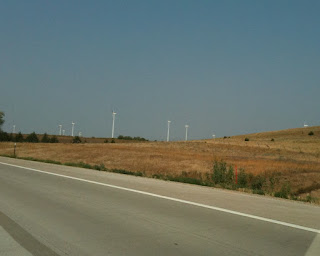 Somewhere in Kansas, the flatlands swell into gentle curves, a promise that more than just thirsty prairies lie ahead. It’s here that dozens of wind turbines stand solemn and white in the fields, their long arms reaching to the heavens, earnest in their task.

“Yeah,” he says. Then, after a pause, “No, they’re more like saints, worshiping. Or people waving flags in the fields.”

The sky is hazy, almost grey. It’s neither sunny nor cloudy.

The corn is stunted, brittle. The fields want rain, but until it comes, there's only wind.

The turbines wave on: soldiers, saints, worshipers, flag-bearers, windcatchers. Lord, help us to stretch out our arms so we can catch the wind.