Nicky lives in a tent. He says he has a house where he could stay if he wanted, but somehow I doubt it. His tent looks well lived in. There's a broken bike in the bushes. Clothes hang from gnarled branches. He carelessly tosses garbage into the brambles. 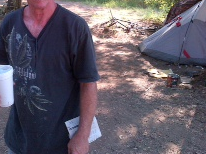 Tell me your story, I ask.

And that's all I get. So we sit for a bit. He sips the coffee I bought him as he plays his Soduko puzzle from a crumpled up newspaper. I can't tell if it's the San Francisco Chronicle or the Redding Record.

The silence makes me uncomfortable, so I tell him about myself. "I guess I'm not sure who I am right now, or what I'm going to be."

He nods. "I gotta figure out a way to make some money."

I had been watching Nicky for a while from a perch up on the hill above his camp. I thought I'd found a nice, safe park to sit and pray. I like going down by the Sacramento River. It's wide and fast moving. It looks swollen, which is strange because all along its banks it's so tinder dry, the smell of nearby raging forest fires in the air.

But I couldn't concentrate on my bible. I couldn't take my eyes off Nicky, entertaining visitors, other rough-looking folks going through their morning wake-up routine. It didn't appear he had much to say to them either.

I'm homeless too. Our financial advisor could put up a convincing argument that I'm at the other end of the homeless spectrum, but I wonder if Nicky and I share something more.

I tell him I'm worried that we can't find a place to live. I tell Nicky that I'm surprised at the wealth in California. I'm thinking of the gleaming white SUVs lined up at the kids' schools for pick-up and drop-off. I tell him I'm not sure where God fits into all this.

And then he asks if he can pray for me. He asks God to open the right doors and shut the wrong ones. Sounds like something I'd say.

We talk some more. His life makes me sad. He points to a huddle of people about 30 yards away. "I knew their parents. Now I know the kids. I know everybody."

I'm pretty sure he's not talking about the parents picking up their kids at our school. But I don't doubt that he knows most of the people living in tents in Redding. I guess once again it's who you know, not what you know.

Later that day I find myself staring at an embroidered picture in a clean real estate office full of computers and designer water bottles and well-coiffed bleached blonde hair. It quotes 1 Corinthians 10:26, "For the earth is the Lord's, and everything in it."

I guess Nicky was right.