This semester, I took a class called "Supernatural Evangelism." What’s supernatural evangelism you ask? Well, it’s evangelism in which your main goal is to bring God’s presence, love and power into someone’s reality.

The teacher is this guy named Chris Overstreet, who at one point was a 300-pound convict. He found Jesus in jail. Or Jesus found him. Anyway, he’s now a passionate, fearless, rasping, shouting, spit-flying evangelist who travels to many countries in the world. He even preached the gospel when he gave an announcement at church a few weeks ago.

One thing he said in class struck my heart: “When you tell someone that Jesus died for them, the Holy Spirit falls.”

I thought a lot about that. And the following Thursday morning, treasure hunt day, I woke up with a prayer on my lips: “Jesus, I want to tell someone today that you died for them.”

You see, I’ve gotten into this treasure hunt thing. I love speaking Spirit-inspired words of life and encouragement to people, praying for their needs and injuries, but telling them that Jesus died for them seemed just too… well… I thought I’d feel like caricature of a soapbox preacher on a street corner.

Right now, some of you might be thinking: Who is this? What have you done with  my Anne? Has she turned into some prosthelytizing fundamentalist type?

Since I fell in love with Jesus when I was fifteen, I’ve wanted to share him with people who didn’t know about him but I never knew how, nor had the courage in this “I’m okay, you’re okay” relativistic North American culture. I feel like sharing various aspects of His love has been part of me for a long time, it’s just growing more now.

That Thursday, we headed out behind the Civic Auditorium, where our school meets, across the Sundial Bridge and along the Sacramento River. I was with Marianne, a second-year student from England, and Cassie, a first-year student from Australia.

I saw him coming from far away. I sensed the word “SON” emblazoned over him.

Keith is an older, retired fellow from the San Fran area. He was interested in Marianne’s and Cassie’s accents. We chatted with him. He told us that after he retired, he moved to Redding for the scenery and nature trails. He now works in a group home caring for the elderly. We shared some prophetic encouragement about his job. He seemed moved.

Prophecy declares a person’s destiny or future, while a word of knowledge is something the Holy Spirit tells you about their present reality. I mustered up the courage to share the word of knowledge I felt God was giving me for him.

“I think God’s saying you’re a good son,” I said. “Does that mean anything to you?”

“Yes, actually it does,” he answered. “My Dad and I are having trouble with our relationship these days. I'm trying to care for him but he can be very difficult. I’m trying to be a good son but it’s hard.”

I took a deep breath. “You know, Jesus didn’t just die to take away sin, he died to heal broken relationships.”

He nodded thoughtfully. I continued, “Do you know Jesus at all?”

He told us how he was raised Catholic but hasn’t thought about the church in a long time, although he considers himself a spiritual person. 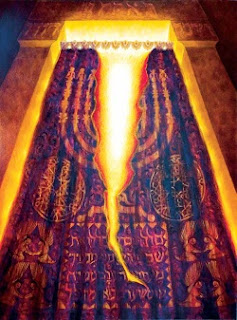 Along with my love and admiration for this gentle, humble man who loves to serve the elderly, I felt a rising conviction that God wanted him to know more about Jesus. So I told him about how when Jesus died, it’s like a big heavy curtain between us and God was torn down the middle, so we can step through it into the Holy place and have a relationship with God. And how when Jesus died, the curtain separating the Holy of Holies in the temple in Jerusalem actually did tear in two as God’s tangible message to us that He wants us to be able to step into His presence.

We talked more. Keith asked a few questions. After a bit, Marianne said, “Keith, would you like to experience God’s presence?”

He nodded. He held out his hands. We prayed. A blanket of peace fell upon all of us. She said, “Keith, are you feeling anything?” He nodded again. “I feel peace,” he said.

Marianne went on. “Keith, do you want to accept Jesus into your heart?”

As Marianne led him through a prayer, my spirit surged heavenward. I felt giddy with God’s presence and joy. And from the look on his face, so did Keith.

I’m no spit-flying, raspy evangelist like Chris Overstreet, but wow, I think I like telling God's beloved children how Jesus died for them.

Posted by Douglas Family at 1:54 PM