His name was Rick and he had fresh stitches down one side of his face. He had a shaved head and piercings. He looked tough. But somehow, all I felt was how amazing he is.

I met Rick during the practical part of our BSSM program is called our “activation.” The idea is that everything we’re learning gets “activated” or put into practice. Andrew’s activation is serving lunch to homeless people on Saturdays. My activation is called treasure hunts.

The idea behind treasure hunts is that each person is a treasure to God. And God is always speaking to His children. It’s our privilege to deliver a message of love, or a prayer for healing, or a word of hope to people who don’t know that they’re God’s treasure.

When we were training for treasure hunts, we were encouraged to ask the Holy Spirit why we ended up in this particular activation. I asked. He answered, “You are my treasure. I’m going to encounter you with my love on the streets of Redding.”

But most mornings when I headed out to my activation, I wasn’t feeling encountered by God’s love. I was feeling scared.

It all changed the morning we met Rick. I woke up that morning with the whispered prayer, “Jesus, I just want my love and compassion for people to overwhelm my fear of offending them.” 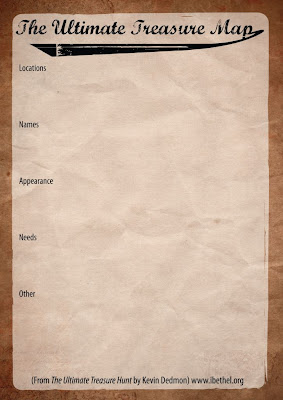 When we first meet up on a treasure hunt morning, we get a treasure “map.” The map has spaces on which we can write locations, names and other details that God might bring to mind. Several of us had Shasta College on our maps. So we set out for the campus. My treasure hunt partner that morning, a pharmacist from Montreal named Mher, not only had Shasta College, but also “Rick,” “stroke” and “soup” all on his treasure map.

Once on campus, we approached two guys at a bus stop. We introduced ourselves asked their names. Rick introduced himself. We asked if there’s anything he needed prayer for. He seemed surprised but said yes, his girlfriend’s mother had recently had a stroke. Mher showed him his treasure map, that “Rick” and “stroke” were both on the map. Rick seemed surprised again, and let us pray for her on the spot.

Right about then I started to feel an overwhelming love for Rick. I started to see him through God’s eyes. Rick explained about the stiches down one side of his face, that he’d been drinking the night before, fallen and hit his head on a curb. We prayed again, asking that the skin on his face would heal quickly and scar-free.

We asked what program he’s in. Culinary, he said. That explained the “soup.” Then I got word of prophecy for Rick that God wants to give him extraordinary creativity in culinary arts, and I saw him bringing the kingdom of heaven to earth when he cooks. Rick began to beam. Turns out, that’s his dream. Also, he loves to cook for homeless people.

He began to talk about the Lord, how he believes in God but doesn’t like church. He thinks that believers should be sharing God’s love outside of the church, like we were doing. Once again, I felt I had a word for Rick, that he was actually created that way—God made him to take love and justice to the streets, not to sit around in a church building. Rick's face lit up even more.

Our conversation continued. We both got more words of encouragement for Rick. Mher talked to him about a relationship with Jesus. Before we left, we prayed once more to bless him and his dreams.

As we walked away, I was walking on air. Jesus gave me such a love for Rick that talking with him was an absolute pleasure. After we initially approached him, it wasn’t scary at all. And I knew that he hadn’t been offended; rather, he’d been encountered by Jesus, who loves him enough to hunt him down.

Three weeks later, I glanced across the big Bethel sanctuary during worship and spotted a vaguely familiar face in a hood. Two songs later, he pulled off the hood and I realized it was Rick. He was there, worshiping a God who considers him a treasure.