The long road home (to Canada) 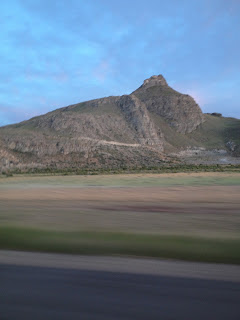 This post was written in June 2013, driving from California back to Ontario. Apologies to those of you who've heard some of these stories.


We’ve been to the mountaintop. We’ve seen the glory of God. We’ve been transformed. We’re on our way home.

Somehow even the landscape we passed by last August looks different now. The mountains are a little less desolate now. Even the sky seems to hold more promise. It's the start of summer. A new beginning.

On the way home, we decided to have some family adventures with the love of Jesus. We decided to ask God what he’s saying to people we meet in coffee shops and fast food outlets. Here are some of the people we met who touched us the most.

The first morning, we stopped for coffee in a small mountain town in California. The young woman serving us was named Jessica. She was very gaunt and her eyes looked a little forlorn. I whispered to the kids, “Are you hearing anything from God for Jessica?” Cassie said, “I’m getting the number 19.”

Andrew was chatting with Jessica about her plans, her schooling and her interests. I interrupted and asked, “Does the number 19 mean anything to you?”

“No,” she shook her head. “Well, actually, it’s my boyfriend’s favourite number. And I just turned 19 yesterday.”

Emma went on to give her an amazing word from God about how she was made for love and He wants her to know she’s loved by Him and others, even though she maybe hasn’t always felt loved in her relationships. 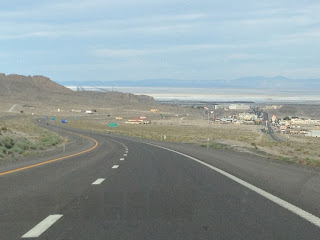 Cassie told her she thinks God has great plans for her this year. Andrew and I had some words of encouragement too. We blessed her and left. Hope to the hopeless.

Later, on the drive, Cam said he felt we were going to meet an older woman who really loves her kids. So when we stopped for dinner at Burger King, we had our eyes peeled.

Sure enough, we saw her across the restaurant. She was with a man and two children.

Andrew went over with the kids and made introductions. Cam said, “I feel like God was telling me that you’re a great mother and you really love your kids. You have a mother’s spirit. Not just your own kids, but there are other people in your life that feel like you’re a mother figure to them.”

The woman, Billie-Jean, began to cry. Emma shared that she felt Billie-Jean is in a season of change. Cassie saw their family as a tree with lots of branches bearing fruit, spreading fruit to other trees. 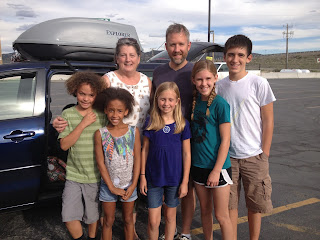 Turns out they were all exactly right. Billie-Jean and her husband, Bill, have five children and 28 grandchildren. Plus they’ve fostered over 50 other children. As for the season of change? She has just taken a new position in ministry leadership.

After we prayed for them, Billie-Jean wanted to exchange information and take a picture with us.

Another amazing stop was in Kalamazoo, Michigan. We stopped to see our friend Becca. Andrew and I took her out for dinner at an Italian restaurant. We ended up chatting with our server, Brad. Andrew, Becca and I each took turns giving him words of encouragement that we felt God may be saying to him. After that, we continued the conversation every time he came to our table.

At one point he said, “My relationships aren’t doing that great.” His shoulders sagged a bit and he looked sheepish.

Andrew said, “Brother, no shame! You don’t have to live with shame.”

Then Andrew went on to share how much God loves him. When we were ready to leave, Brad and Andrew exchanged numbers.

When we got back to the hotel room, Brad texted Andrew and asked to meet him for coffee the next day. They met at the MacDonalds next to our hotel, and Brad decided to follow Jesus. He’s an amazing young man and we’ll stay in touch to hear about the various ways God is filling his life with good and perfect gifts.

It turns out, when we’re willing to share God’s love with people, we get tremendously blessed, too.